The Age of ARM

Doing your own software and your own silicon is back in computing style again. Apple have been moving towards releasing ARM powered Macs running on their in house designed processors for a while now. Off your desktop and into the cloud, AWS is on its second iteration of its ARM based Graviton server processor.

The original Graviton processor was a 16nm part consisting of 5 billion transistors. The Graviton 2 is a 7nm part, with 30 billion transistors delivering a performance increase of 7x over the first-generation part. There are 4000 pins on the back of the processor package so you will not be slapping one of these into a motherboard you own. Though that is more down the fact that current consumer motherboards use contact patches and not pins, but still, there is a lot on that Graviton 2 processor die.

The economic drivers of doing the whole thing in house might be the same for both companies. The price/performance ratio for AWS Graviton 2 instances running Linux is notable, but in Apple’s case this represents Apple walking away from Intel. 14 years after they walked towards them.

Architecture Plan B’s are not new. Back in 1991 Windows NT was being developed for Intel x86 and MIPS. Dave Cutler, the mercurial leader of the Windows NT project, was obsessed with portability. To Cutler, Windows NT was to survive even if the hardware architecture it was built on withered. Microsoft was all in on x86 and the pull was strong to move forward just with that. Cutler, paranoid that Intel might drive itself into a ditch, ensured everyone on the NT team knew that his dev machine used a MIPS CPU.

Not to support the MIPS version was to stand in opposition to Cutler. Woe to the developer who tried to check in some x86 specific customisation into the NT builds. Cutler would come storming out of his office and make a bee line for the developer involved. At the time, the fastest way to get the head of the largest commercial software development effort in the world, Cutler, to your desk was to flag a problem getting something written for the MIPS version.

If you had a design problem, he would try to solve it. If you had a bug, he would test it for you. In the end MIPS was the company that drove itself into a ditch, but the portability lesson was taken to heart by other companies. Companies like NeXT, which started life on the Motorola 68000 in 1989 but in 1993 released an x86 version of NEXTSTEP and a version for SPARC and PA-RISC in 1995.

Apple are experts at pulling off evacuations from what they feel to be are losing prospects. They escaped the moribund PowerPC architecture with a quick transition that they started in 2006. Expect that the same bag of compiler tricks, performance profilers and verification checks as last time will be used to move from x86 to ARM.

Before the smartphone, the future of computing was the x86 architecture. With movement towards ARM in Apple notebooks and desktops as well as the proliferation of cloud based Graviton instances we are now in the Age of ARM. 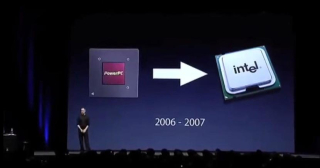 Some people are just hitmakers. When it comes to microprocessors, Jim Keller, is a hitmaker. Having worked on the AMD Athlon he drove a sword into Itanium with the K8 x86-64 bit architecture before leaving AMD for new opportunities.

There was a route through PA-Semi (Apple’s processor acquisition) before a boomerang back to AMD to work on Zen. Zen and its successors are also hits, so much so that AMD is on track to reach the heady height of 20% desktop/notebook CPU marketshare. Something they last did two decades ago back in the Athlon days.

Unlike the Athlon, where PC enthusiasts and budget conscious consumers sought out those processors, the new new thing is the growing AMD server CPU business. Years ago AMD failed to crack the fortress built of market development funds that Intel placed around the tin benders of the server business. That crimped AMD's server growth even when they had a winning line of chips.

In the age of hyperscale providers, where offering multiple CPU types is seen as advantageous to consumers, this type of fortress is a remnant of a bygone age.

Intel’s server CPU business has long been a jealously guarded high margin treasure but now AMD have shown up to make off with some of it. AMD started at 1% server CPU market share in 2017 and have grown to 8% in two years. Could they slice off 10 or 20% of the server market? It’s possible.

One minor wrinkle in all this is after bouncing around Tesla for a split second Jim Keller took a new job.

One of the people who dynamited Intel’s most high profile failure is now working to restart their invention engine.

Lets see if a tired old chip maker has one more hit left in them. 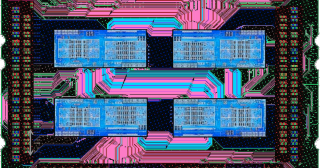