The Great Influenza by John M. Barry proved to be a difficult read for me under the circumstances in which we find ourselves. Normally I would have ground through it at a reasonable clip. Current events had me pressing forward on willpower alone. It is a good book but you cannot help but draw parallels between today and what happened during the 1918 pandemic. This makes it a depressing read.

Any ineptitude, greed, or cretinism that you see in the response of people to the pandemic today can be seen occurring more than a century ago as you read this book. Thankfully, the nightmare the people back then found themselves embroiled in, World War I, has no modern counterpart. In 1918 the press did not cover the public health disaster on their doorstep as it was thought to be bad for public morale during wartime. Today, if anything, the press will not shut up about every minor development as the pandemic continues. So much so that regular news consumption today must be psychologically corrosive.

What this book highlights is how much worse things could be. The progress the influenza outbreak of 1918 made is horrific when structured on the page. Families wiped out because every member was too weak to tend to anyone else. Hospitals collapsing under the strain of patients to whom no treatment could be given. Accounts of clinicians and nursing staff who refused to give up in the face of a tsunami of illness checking on who survived the night only to find beds filled with cadavers. Mass graves were required to deal with the volume of corpses to be disposed of. These corpses came from hospitals, private homes, and tenement buildings. They came from ice huts in Alaska. They came from everywhere.

This is not just a book about mass death it is also a book about heroic failure. We are introduced to several of the best and the brightest who redefined medical treatment in the United States. Then, financed by the limitless fortunes of industrial titans and robber barons, we watch them fail. The best and the brightest open a door to medicine as a science and not an act of barbarism where bloodletting was a curative treatment. They make great advances and crack difficult secrets but then nature slams the door shut on them.

Repeated throughout the book is the phrase “influenza, only influenza.” This is indicative of the confusion the scientific investigators had as they tried to figure out what was killing tens of millions of people around the world. Nature took an annoyance and weaponised it in a way that conservative estimates of the death toll from the 1918 pandemic are as low as 50 million and perhaps closer to 100 million dead. Not covered in the numbers are long-term disabilities the virus inflicted on the survivors.

In Paris while negotiating the World War I peace settlement president Woodrow Wilson was struck with influenza so quickly and its symptoms were so violent that the Secret Service were convinced it was an assassination attempt and he had been poisoned. Herbert Hoover is quoted as saying Wilson had a mind which was “incisive, quick to grasp essentials, unhesitating in conclusions, and most willing to take advice from men he trusted.” Hoover then went on to say that after the influenza he believed Wilson’s mind had lost “resiliency.” This lack of resiliency may have paved the way for the Second World War.

The result of the peace talks that took place while Wilson was stricken were that the United States yielded on everything of significance to the French with the result of putting Germany on the hook for economically crippling reparations and stripping it of land in Europe and overseas. The long-term effects of these pandemic viruses have not been noted and because you survive does not mean you are whole. Wilson’s health declined considerably soon after. How many millions of Influenza survivors declined in the same fashion? We do not know.

This is a book I would recommend to anyone. Though maybe a recommendation with more vigour after the world has put Covid in its rear-view mirror.

The thing about lockdown is that I think it ages you. Not physically (I could do with more exercise though) but socially and mentally. With everything shut down I suspect this is what it's like to be an old age pensioner.

The opportunities the world provides are closed off to me. The way they are for most of us. Where previously you might have been “too busy” to do something now you don’t have the opportunity. It could be a hell of a lot worse. I’m reading The Great Influenza, review when I finish, and that pandemic was horrific.

Show symptoms at 10:00AM, dead by 10:00PM. Entire households wiped out. Thankfully we’re not living through that. Life at the moment has levels of difficulty depending on your situation. It’s an annoyance for some and a nightmare for others. At any other time in human history we’d also be subject to tyranny or more virulent pestilence. Life might not be great but if you have tomorrow you have another shot at it.

The TV content drought hasn’t hit me yet. That’s probably because I’m now subscribed to more streaming services than ever before. Previously I’d have argued that consolidation was going to occur in that sector soon. Too many services hoping for customers to double and triple dip on their entertainment budget. I’ve come to see that the services serving genre fans will do just fine.

The giants will scoop the broad viewing market but they're not interested in going deep. The market size for genre content is limited but if you control your costs and have people curate the content it can be a lucrative ongoing stream of revenue from a customer base that isn’t served well by the major streamers.

It’s a Bank Holiday here and I’m looking forward to getting out for a walk between rain showers. Take the walks when the opportunity presents. They’re good for you.

Unrelated: New RPG book to read, the Spanish behemoth Aquelarre. A Medievil demonic roleplaying game with some gruesome, dark ages style, artwork. Chances of me getting to play it are slim but I’ve enjoyed reading it and it looks great on a bookshelf. With such a good looking product I would have liked if it came with ribbon bookmarks. The more biblical looking the better. 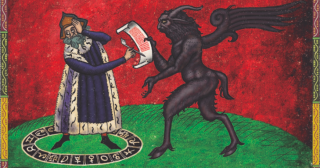