Sitting in the cinema it did not take me long to realise the latest Wonder Woman was not for me. By the end of the movie I did question who exactly this movie was for? I was surprised by how dull the thing was to watch. With the action stripped back to the bare minimum I found myself wondering how much time was left on my parking during the movie’s crescendo.

Ditching the horrors of war covered in the first outing we find that Wonder Woman has become a deity level Peter Parker. Working one street level issue at a time. A bright smile, and a flick of her lustrous hair in place of a witty Spider-Man quip.

Wonder Woman saves kids at the mall, she saves joggers from reckless drivers, and she beats up inept robbers. Her sword and shield sit in storage because the minor threats she faces in the 1980s means she no longer requires them. She is overpowered for the era she lives in and does not have to try as hard. Someone else not trying hard is the screenwriter. You can see where every re-written sequence was stitched together with the result that the finished product feels uneven and unsatisfactory.

The issue with putting Wonder Woman in such a low stakes story as the one she finds herself in is that nothing is ever a threat. It’s the Superman problem, and just like in Superman II to meet her opponents on an equal footing Diana begins losing her powers because she chooses her lover over a wider good. Richard Donner did this 40 years ago in Superman II and he did it better.

Superman II was also set in the 80s by nature of when it was filmed and did not trade on nostalgia. Wonder Woman 1984 puts its nostalgia in the title. I would have liked to have seen the second Wonder Woman movie set in the 70s, but the era of Disco, Quaaludes, and Bill Cosby would not have been as child friendly.

That said, during the movie the spirit of Steve Trevor possess another man’s body and we are led to believe that he and Diana have sex. We are shown it is okay though because we see this meat puppet again later and he appears to be doing just fine. He remembers none of the Amazonian lovemaking. Diana flashes him another bright smile and moves on with her life. No harm, no sexy time foul. Maybe they should have set this movie in the 70s after all.

The picture opens with the message that you cannot prosper by taking a shortcut. Neither of the antagonists learn that lesson and the protagonist already knew it. In the case of Barbara Minerva, a better message might have been “you do not need to be as powerful, graceful, or beautiful as Wonder Woman to feel like Wonder Woman.”

That message would have required a bit more work on the part of the producers though. 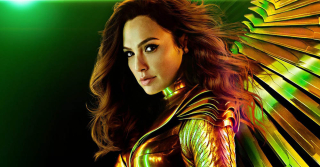