The Fall of the House of MAGA

I can see the tactical case in Big Tech looking to crush Trump and scatter his followers today, but strategically I think the timing is wrong. This would have been a finishing move were Trump a private citizen. When done to a sitting President of The United States it's nothing but an opening to long term grievance with his tens of millions of voters.

Anyone who loves the United States as much as the MAGA types say they do had to have looked at the footage from Wednesday and seen a country that looks fragile. Even amongst those I know who make my eyes roll when they tag their Instagram photos with #nomask or #liberaltears there were feelings of embarrassment about the Washington riots.

Wednesday night and Thursday, Trump was beaten and to his supporters he looked weak. There were a litany of excuses from MAGA believers, he was just one man fighting a rigged system, his advisors were terrible, but it was over when he conceded. Then Big Tech, which has been gutless throughout the Trump years, showed up on Friday with permabans and social media app delistings. In doing so they gave MAGA a new target and it is a perfect target as MAGA never has to concede to it.

Unlike Biden there is no final vote with Big Tech. You can fight it forever and never lose because the battle always continues. I think that moving on Trump and Parler at the same time, while Trump is the sitting US President, has reenergised part of Trump’s voter base and this energy will carry through even after he leaves office.

There's also the point that Trump's political opponents are looking at this and thinking that at another time Big Tech could move on them. Such thoughts lead to the conclusion that if Big Tech can challenge a sitting US President then it is beyond time that Big Tech gets regulated and broken up.

The Fall of the House of MAGA, so close in the middle of the week, has now become MAGA Forever. All because Big Tech couldn't wait until Trump was a private citizen before acting. 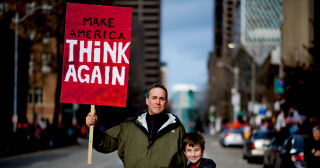 Photo by Jose M. on Unsplash